Diogo Machado and the beautiful Art of Portuguese Tiles

If you’ve ever been out and about in Portugal, you’ve probably noticed the painted tiles that adorn the facades of buildings. Called azulejos, these magnificent glowing decorations are one of the most distinctive features of Portuguese urban architecture and design. They adorn both the exterior and interior of many buildings and serve as both a functional and beautifying addition to the cityscape.

Although azulejos do not originate in Portugal, it is where the craft is still thriving and alive, alongside Morocco. The first known glazed tiles originated in Egypt and Mesopotamia in the 27th century BC, but the technique was not introduced to the Iberian Peninsula until the 13th century AD by the Moors from the Middle East. Originally, the craft was developed to imitate Byzantine and Roman mosaics. For this reason, the tiles are also called azulejos – a word derived from the Arabic word “zellige”, meaning polished stone. Starting from a purely decorative function, the tiles have developed into an art form in their own right. And as they have been adapted and developed there over the centuries, they have become one of the most iconic aspects of the country’s history, architecture and culture.

Artist Diogo Machado also known as Add Fuel was always fascinated with the aesthetic possibilities of symmetrical patterning and tessellations.

The Portuguese visual and urban artist lives and works in Cascais, Portugal.  Starting out under the full name Add Fuel to the Fire, he first created a dark yet exuberant visual universe populated by a cast of slimy, eccentric and joyful creatures, influenced by a variety of interests ranging from video games to comics, animation, sci-fi, designer toys, and urban visual culture. Creating balance and harmony from symmetrical repetitions, a build-up of layers and techniques of visual illusion such as trompe-l’œil, his multi-layered patterned compositions produce a poetic rhythm that plays with the viewer’s perception and the (multiple) possibilities of interpretation.

Exploring a wide range of both manual and digital techniques in the fields of drawing, painting, ceramics, and printing, his practice expresses a sophisticated dialogue between the old and the new, between heritage and modernity. In 2008, he began redirecting his focus towards working with and reinterpreting the language of traditional tile design, and that of the Portuguese tin-glazed ceramic azulejo in particular. Effortlessly blending these two seemingly-irreconcilable visual idioms, his current practice seeks to combine traditional decorative elements with contemporary visual referents into new forms that reveal an impressive complexity and a masterful attention to detail. 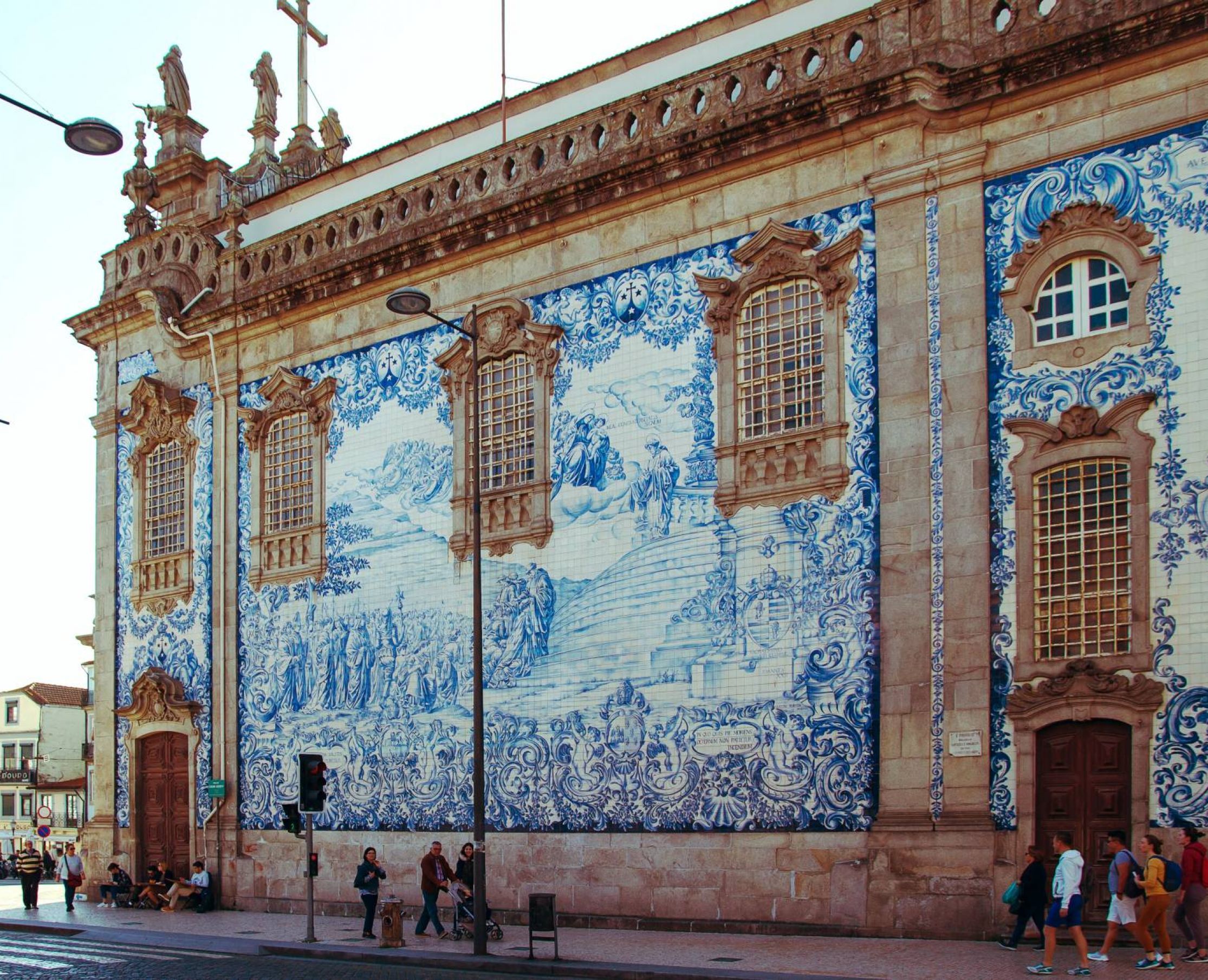 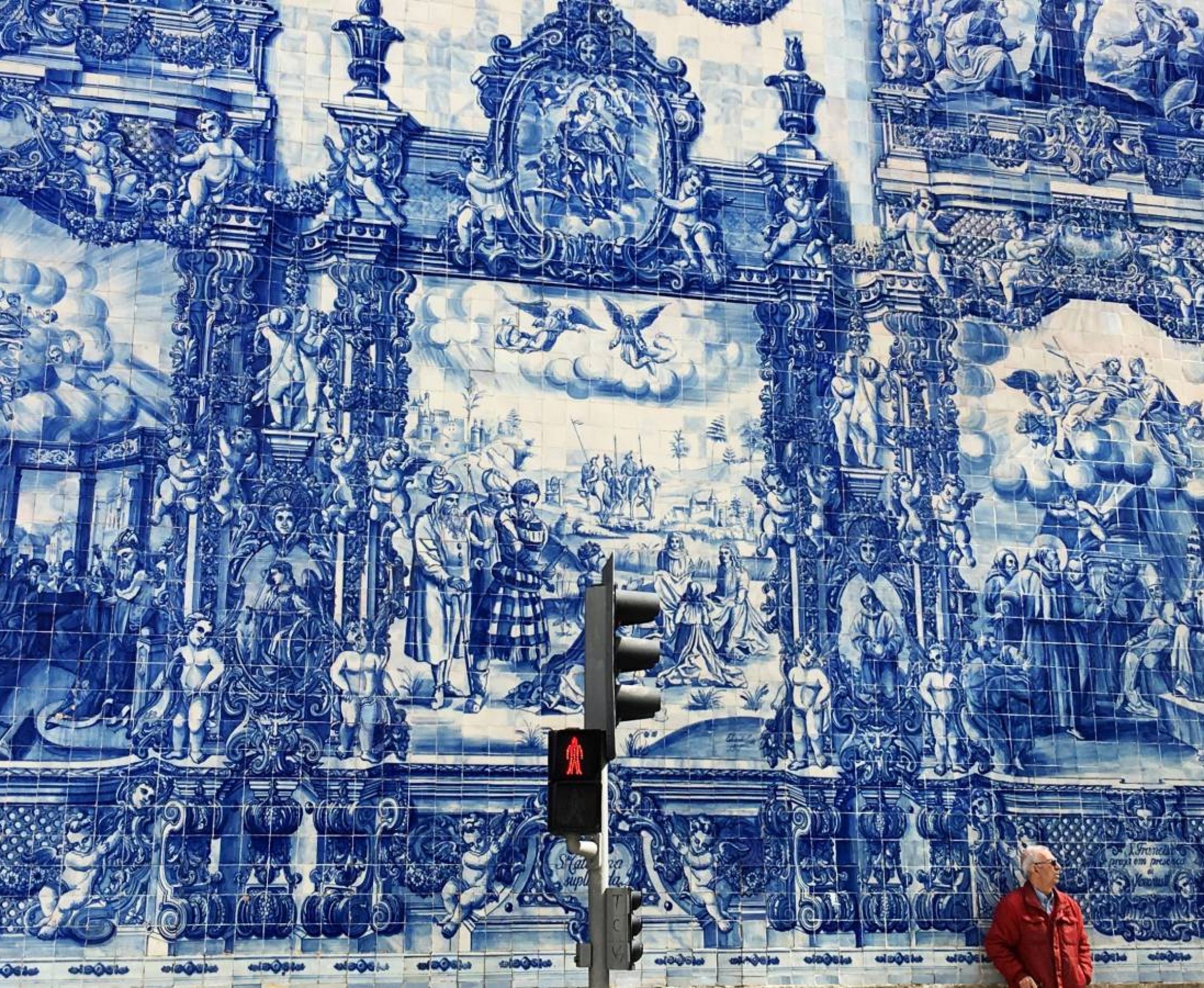 The Origins of Azulejos in Europe

Portuguese king Manuel I fell in love with this technique after a visit to Seville in 1503, and he later introduced the craft to his home country. Azulejos were used extensively in the Sintra National Palace—just outside of Lisbon—and from there, the Portuguese love affair with azulejos only grew. This was so much so that they even adopted the Moorish tradition of horror vacui (or the fear of empty space) and began to cover walls completely with the glazed tiles.

During the early to mid 16th century, the Portuguese mainly relied on foreign imports of tile from Seville in the south, and on a smaller scale from Antwerp in the north. It was during this time that potters from Italy had established workshops in Seville, and they brought with them the maiolica techniques—a form of tin-glazing pottery that allowed them to represent more varied and figurative subjects and themes on their tile compositions—and also the influence of the Italian Renaissance and Mannerist styles.

This development in the technique sparked a shift from solely repetitious patterns and elevated it into a form of artistic creation where the tile was painted on as if it were a wood panel or canvas. Consequently, most of the tiles began to depict allegorical and mythological portrayals of the lives of saints and scenes from the Bible as well as hunting scenes. Now, instead of craftsmen creating repetitive patterns with the tiles, artists were painting them as large-scale panels and signing their names to the creations. At the end of the 17th century, the Dutch began to produce monochromatic blue and white tiles, imitating the much-coveted style of Chinese porcelain. This variety of azulejos became extremely popular among Portuguese aristocrats, and they began to commission them in great numbers to decorate their palaces and churches. Portuguese tile painters also began to copy the technique, and after King Peter II put a stop to all imports of azulejos from 1687 to 1698, they soon only used tiles produced, designed, and painted by Portuguese artists. The blue and white style had become the most dominant trend, and this is quite apparent in its overwhelming presence all over the country today.